An alternative way to advertise yourself

In a pinstripe suit, silk tie and polished shoes, David Rowe had all the trappings of a successful London city worker, except for one stark difference — he was wearing a sandwich board that read “JOB WANTED.”

As he walked down Fleet Street, home to legal firms and investment banks, the 24-year-old history graduate showed the human face behind the “lay-offs” and “recession” headlines.  “The first 20 paces are the hardest, you feel very conspicuous, but you just steel yourself to get on with it,” he said, starting a slow trudge toward the Law Courts before turning toward St Paul’s Cathedral.

In previous economic downturns it was manufacturing and heavy industry that were worst hit.  Now in Britain, and much of the West, white collar jobs have been culled in the financial crisis – marketing directors on six figure salaries, IT specialists with 20 years experience.  That makes it especially hard for young men and women like Rowe trying to start professional careers.  For many the corporate ladder has been pulled away.  They are left with the prospect of low paid unskilled work, if they can find it, and large debts. 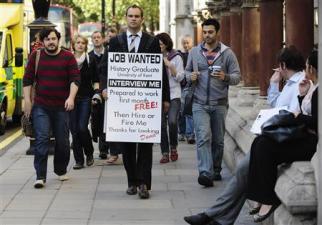 “I have debts of about 20,000 pounds, and that’s not excessive compared with how much some students owe when they graduate,” Rowe told Reuters as he took a break from his one-man advertising campaign. My dad bet me I wouldn’t do this, that I wouldn’t have the guts.”

Rowe was facing a tough market even before the downturn.  Britain has seen explosive growth in the number of university and college students, but there has not necessarily been a comparable rise in graduate-level jobs.

Twenty years ago about 17% of 18-30 year-olds were in tertiary education against a figure of 43% in 2008.  Add that mix to an economy in trouble and it makes uncomfortable reading for people like Rowe.

But Rowe is one jobseeker who is not downhearted.  Just hours after he started wearing the sandwich board that offered his services free for a month with the option to then “hire or fire me” he struck lucky.  One employer certainly liked Rowe’s initiative and decided to interview him.

“I liked the fact he had thought out of the box.  I was impressed by that.  I was even more impressed after the interview.  He’s very employable, so much so I offered him a job to work with me.”

Rowe, who has amassed a growing collection of business cards, says he will think carefully about the job offer.

If you want an alternative to donning a sandwich board to get yourself noticed,  Buy “Secrets of Personal Branding Online” now for£39.95